Tarot of the Absurd: A Review

In the beginning of August I entered a contest on Ohm Sweet Ohm’s Facebook page to win a tarot deck called Tarot of the Absurd.  I had never heard of the deck before so I was very intrigued when I looked it up and saw a black and white deck with very quirky art and when I say quirky, I mean fabulous!  This deck is very different than any deck that I have ever seen.  Granted, there are so many decks out there that I probably have only seen a smidgeon of what is actually available and out of print but this is the first time that I have seen something like this.  I started doing a bit of research on the deck, the artist, and when it was created and found in that research that the artist, Jessica Rose Shanahan, has a marvelous sense of humor, which can absolutely be seen in her art in this deck. 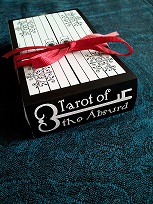 
When I found out that I had won the contest I was beyond excited and couldn’t wait for the deck to arrive.  And then it did.  The deck comes in a sleeve that is tied with a red ribbon and it also has a title card which tells you what deck number that you have in its limited run of 600.  While the sleeve isn’t going to stand up very well it is very special because the artist assembled them by hand.  This is such a huge plus to me so it will receive a very special place in my collection.  The art itself is based on the traditional Rider-Waite illustrations, with the Magician becoming the Alchemist, and the suits becoming Blades, Coins, Cups and Sticks.  The art is very simple in a good way.  Some black and white decks that I have seen the illustrations are very busy making them very difficult for me to read, but not this one.  The simplicity in black and white just pops out at you, practically screaming its messages.  A fabulous bonus is that the deck is borderless making it easier to read.


The card stock is a bit on the thin side but it seems to me that it should hold up pretty well.  It’s also a good size and easy to shuffle which is great because I have small hands.  The backs are very simple, but beautifully decorated double doors which lend a bit of elegance and invite you to open it up to discover the secrets on the other side.
﻿ 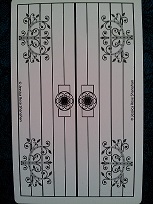 A couple of my favorite cards are Strength and 7 of Blades.  The strength card shows a woman standing over a lion, prying open its mouth with a face full of agony.  On one foot she wears a high heeled shoe and the other is in the upper right had corner of the card.  The lion looks as though he is saying “ok.  I would have opened my mouth if you would have just asked but carry on”.  It really captures the essence of what strength is about and can even say that sometimes we tend to make things harder than what they have to be. 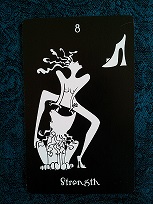 The 7 of Blades cracks me up every time I see it.  It embodies the typical meaning of theft, deception or betrayal but with a comic flair.  We have a man wearing a long trench coat with 7 blades inside of it and he holds up the one side as if to say “psssstt.  Are you looking for a blade?  I got what you looking for at a good price.” 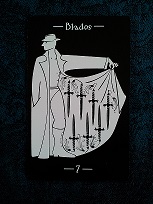 The artist chose to have 2 moon cards in her deck, one of which is a mother who is eating her own child.  While some may find it creepy, I find it hilarious.  Not that I would eat my children but as the mother of 2 girls, their teenage years were very difficult so I can certainly find the humor in this image.
﻿ 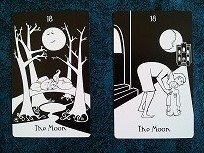 The readings are accurate and to the point, kind of like that best friend who tells you like it is with that sassy sense of humor and her eyebrow arched in disbelief that you even had to ask the question in the first place.

This deck is superbly charming, witty and just plain fun!  It will definitely be used on a regular basis in my house.  I’m simply in love with this deck.

If you wish to purchase this awesome deck you can do so from the artist, Jessica Rose Shanahan, at 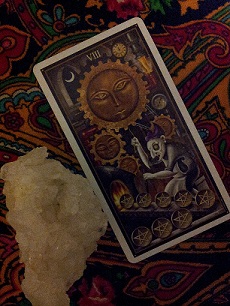 8 of Pentacles from Deviant Moon Tarot by Patrick Valenza


Recently I heard someone state how they “lowered” themselves to take a retail job in order to make ends meet and they felt that it was wasting their time because they have a degree that they can’t use.  While I understand what this person was saying, it really chapped my butt.  Since when did taking a retail job mean that you were lowering your standards?

This isn’t the first time that I heard this recently either.  My husband is a long haul truck driver, moving trucks – semi’s, box trucks, vans, whatever it is – from one state to another.   One of the drivers that used to work for the company (they refuse to use him because of this attitude) would turn down moving trucks that weren’t semi’s because he said it was a waste of his CDL license, even though the pay was the same.

I can’t tell you how many times I have heard this kind of talk and to be honest, I don’t understand it.  Why are we too good for this job and have to “lower” ourselves in order to take something that we don’t want to do?  Do the people who think this way think less of the people who are doing those jobs that they feel are below them?


My parents taught me that you take whatever job that you need to in order to make ends meet and you should be proud that you are supporting your family no matter what you are doing.  Not only that, but you do the BEST job that you can do.  I have taught my children this same thing.  My oldest daughter holds a CNA license and she had a job as a CNA, however, this facility didn’t treat her very well and they wouldn’t give her more hours then 24 hours a week when they had promised more when she first started.  As a single mom who was living at home, she needed something that would give her more hours.  She had the opportunity to work at an establishment making donuts as their processor.  Not only did they give her enough hours, but she moved out and has her own place and she is one of the best processors that they have.  Sure she would like to go back to being a CNA, but right now she is happy where she is at and she is providing for her son; my grandson.  My youngest daughter works for a fast food restaurant and was cleaning up, following the cleaning guidelines, one of them cleaning the cabinet doors and the handles.  She was told that even though these are on the cleaning list that she is the ONLY one that does this.  I have to say, I’m extremely proud of my daughters, and that pride increases tremendously when I hear stories of people thinking that they are above doing certain jobs.

While I agree that you should always strive for the best and not settle for less than what you want, I don’t believe that it has to mean that you have to have the attitude that you are better than a certain job and you would rather do nothing than take a job that is “demeaning” to you.  What is wrong with taking whatever job that you need to take in order to pay your bills, or feed your children and continue to look for something else while you are there?  What is wrong with taking pride in your work, even though it’s not your ideal job, and doing your best while you are there?  In this job market, it is difficult to find a job anyway, so if you are lucky enough to be able to get one, take it and take pride in that job!  Rock that job, baby!    Be proud that you are doing what you need to do rather than being resentful because you don’t have the job that you want because believe me, that shows in the work that you do and people see it and hear it loud and clear.


In the meantime, we should all be grateful for having any job that we have, take pride in what we do and do our best doing it and if you don’t want the job, that’s ok.  However, if you hate it so much that it affects your job performance you should probably find another one because I can guarantee that there are several people who would love to have it, no matter what it is.

Have a great week!!

Machelle
Hello! My name is Machelle and I am a tarot reader and Reiki practitioner. Please visit my website www.rayoflighttarotandreiki.com or email me at machelle.earley@gmail.com.